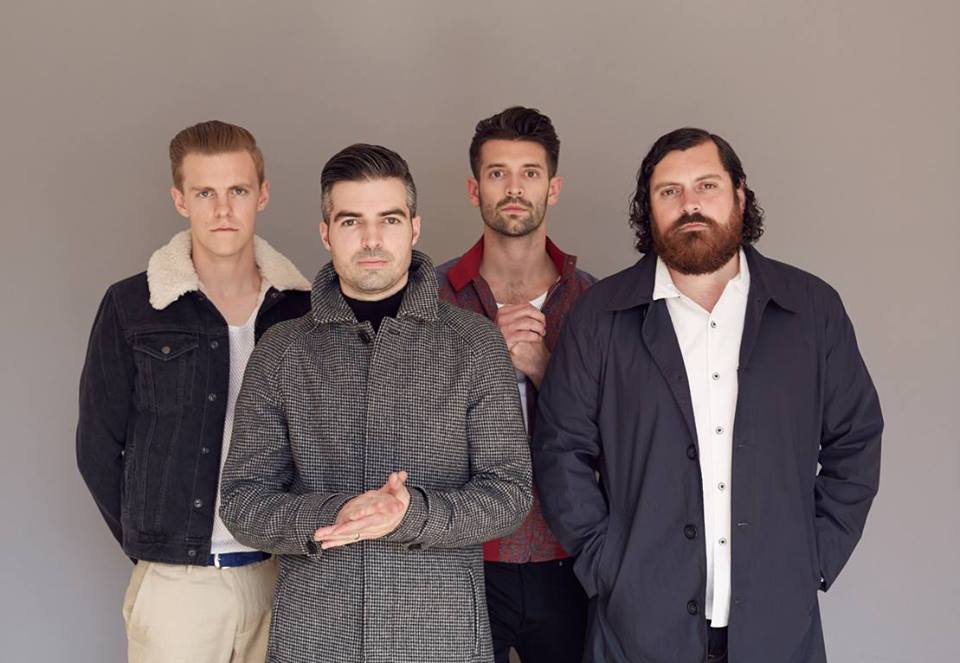 The Boxer Rebellion, in simple terms, was the name of an uprising in China just over 100 years ago against the west. In all honesty, we have no connections to it at all, and when we first chose the name, we didn’t know an awful lot about it. We had been searching for a new name for quite a while (not an easy job!) and we found it in a political dictionary, and as soon as we saw it we all liked it. It was pretty much the first name we all really liked.

Promises is the first album you’ve recorded in your very own studio. In what way was it different?

Well, we recorded some bits there, but the main chunk of it was recorded in LA. We created the studio to give ourselves the ability to record a decent sound for most things for the first time this time around. A lot of what we had recorded in that room before was largely written with us all playing together and then putting two mics up to record what was going on, mainly so we wouldn’t forget it. This time around it totally changed how we write. We are able to start ideas from one thing – often a set of synth chords or a drum loop – and build things on top rather than tire ourselves out by constantly playing round different song structures. It has definitely quickened up the songwriting process, which is a great thing.

You’ve said that when you started recording it, your live shows were in your mind. Do you think that you’ve succeeded in capturing the essence of your concerts?

I think actually, this is the first album where we haven’t thought so much in terms of making sure we can play everything live. That approach has possibly held us back from wanting to make the music we want to make at times. We just found a different way of bringing these songs to life than on different albums. Whilst we did layer things a little more on Promises, I still think there is a good live element to it all, particularly from the rhythm section.

What are the pros and cons of being an independent band? Why did you chose to abandon major labels?

I wouldn’t say at the time we chose to abandon major labels. Our label at the time imploded and we were left quite on our own for a little while, with just our new music to keep us going. Sometimes we wonder how we lasted it out until the release of our second album, but we are delighted that we did. Pros from being independent are clear for me. We have autonomy over everything we do, we are able to choose who we work with, when we release things and when we tour, all hand in hand with our management, who we are very close with. We effectively run like a small label and with us 4 in the band also doing more of the leg work than some bands might do. The cons really are the limits of our outreach. Lots of bands can afford to spend lots of time and money in one or two territories, waiting for the music to stick in that place, whether that is constant touring or big budget advertising etc, etc. We are just not able to do that, and servicing all of our fanbase is a hard thing to do. Our band is effectively a business that can’t really be bankrolled by anything other than it’s own existence – there are no other acts on a label for us to take a financial hit if we really want to dig deep. With that said, we don’t run up un-recoupable bills that are never likely to get paid back. We like it this way really, it’s a lot of fun.

What’s your opinion on the current state of the music industry, and record labels, generally?

I feel like the music industry has been quite a reactive, rather than proactive, industry for some time now, particularly in the UK. Change over the last few years has been massive, and not everyone has dealt with it very well. It cannot exist on record sales anymore, and the indie winners are ones who are able to get out there and be innovative to make a profit, and therefore to exist. We always say that if we had been around 20 years ago, in our situation, we would make a lot more money than we do now, but then it really doesn’t all come down to money, or at least it shouldn’t. The downside to the industry for me is that there is less risk – less acts are given the opportunities than they were even 15 years ago, and the big acts really can soak it up to a big extent. There will always be the struggling creative acts earning zero or less, but the middle is falling out the industry music-wise and that is not a good thing for general choice and quality of what is put to the general public in my opinion.

There is something like a bad like following you in the early days of your career: Nathan Nicholson’s illness, label imploding just after releasing your first album, Union couldn’t make it into the charts because digital-only sales didn’t count – what were your method of not losing your cool and keep going?

We honestly had every opportunity to quit what we are doing. The timing of things during the making, touring and promotion of our debut album was not good. It pretty much read like a list of how not to do things. Yes, there were very unlucky things that occurred, like Nathan being ill, but there were also things that happened that could have been avoided, like signing to the wrong label at the wrong time. But we were inexperienced, and we have learned so many lessons as a result that I believe that 18 months or so surrounding that album release has helped us to where we are now really. My only regret is that Exits never got anywhere near the exposure it deserved. I am very proud of that album.As for the digital only sales not counting on Union, that actually secured more press and attention than we could ever had imagined so if you ask me, it really did us a favour.

We always had a strong bond. None of us grew up together. We all came together purely for the music, and really, in terms of keeping our cool, and keeping going, well, it was the faith in the quality of our second album that did that for us. We knew we had a good product, and that it could make an impact. Seeing that actually happen was probably the most satisfying time of all our years in this band.

Your songs appeared in many TV shows and films – can you recall your favourite music – scene symbiosis, be it from TV show or film?

Personally, I have only ever watched our music live on a TV show once. It was the same week we played The Tonight Show in New York for the first time, and we also had our first sync on Grey’s Anatomy, and I remember us all round a friend’s apartment with a few beers watching it one evening that week we spent in New York. It wasn’t necessarily the best sync we have had but for me it was the most memorable, just because we were all together to watch it. I had a couple of quite drunk evenings in New York that week!

Why did Todd Howe left the band and how did Andrew Smith came into the picture?

It has been a long time that we have been a band – 13 years this summer – and things are bound to change in that time. Todd felt like he wanted to move on, he had just got married to a new lady in America, and that would have changed things dramatically for a functioning band and his priority has to be with them. It was a tough call for him but he has other things going on over there now, and we are happy he is happy, which he is. We are very proud of what we achieved with him over the years.

As for Andrew, he played bass for a support act that we took out on the road last Autumn around Europe called Christof. We knew he was a talented musician, and mainly guitarist, so when we initially had to get someone in to fill in quickly for the shows that we had coming up straight after Todd’s departure, we called him first and he stepped in straight away. We have spent most of the summer getting to know him, and seeing if we can write together and as of August we all decided it was the right thing to do to get him on board, and we couldn’t be happier about it.

You seem to have a special connection with iTunes – many of your albums came out as iTunes exclusive. How did it came?

We got very lucky to be honest. In the end it came down to one guy at iTunes, a guy called Damon Mazarno. He used to own his record store in Connecticut, and was a fan of all our early stuff that we put out through Poptones. We spent a long time on Union, and emails came forth from him asking where our second album was. Well, it was done, but very little was happening so we were almost considering giving it away for free from our site. I am glad we didn’t as a couple of months later, iTunes, and particularly Damon and his colleague, Jay Liepis, who we are still great friends with, decided it was worthy of quite a major release, so they stuck it in the store alongside giving Evacuate a global single of the week giveaway. It really did change our career over night, and we are always very thankful to them, and have stayed close as a result, hence our continuing working relationship too.

With every release, you move towards a different musical direction. Do you already have plans about what your next release will sound like?

We have about 18-20 songs already written for the new album, yes. We have spent most of the summer doing. It is still very much in the demo state, and things always take a massive change in direction when we come to lay down the final recordings of these pieces, so it’s hard to say. You’ll just have to wait and see!
—-
If you want to win a copy of the band’s latest album, Promises, you have nothing to do but send a message to A38 Ship and tell us, when did Promises came out. We will contact you in a DM on the day of the concert if you are one of the lucky ones!