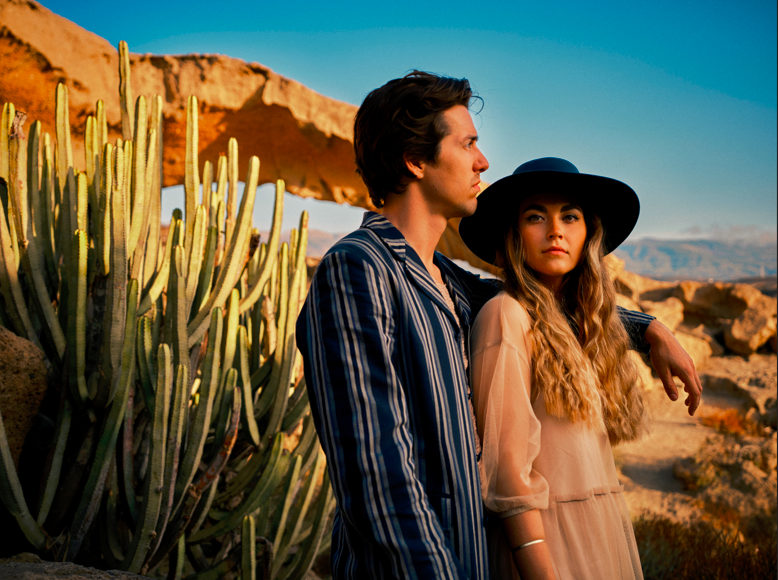 Austrian duo Cari Cari are one of the hottest musical acts of their country right now. Alexander Köck and Stephanie Widmer released their debut album Anaana in 2018, and this September they delivered their follow-up, titled Welcome To Kookoo Island. We asked the pair about the beginnings, the new songs, Quentin Tarantino, Austropop, Burgenland, and more.

You’re said to have met at a backstage area. What venue was it, and who performed?

Alex: We met at the gig of my first band The Golden Rabbit. I found Stephanie’s music online and asked her if she wanted to be our support band. I was so blown away by her performance that I asked if I could record her music in my home studio in my parents’ basement. She said yes and I somehow managed to sneak into her band (laughs).

What are your mutual favorites? Are there any genres, bands, singers that you don’t agree on? What do you think of 1980s Austropop?

Alex: Haha, I love early Falco (the Einzelhaft album) but generally the 80s are not my decade. I love some disco records like Donna Summer but the cliché 80s sound and style is really not my cup of tea. I think that’s also where we disagree the most.

Alex: I don’t hate her. I think she was an incredibly talented artist and singer. But the aesthetic of her music is so appalling to me that I just can’t enjoy it. I’ve seen a backstage warm-up video of her. I was blown away, she sounded like Aretha Franklin.

According to Wikipedia, you founded the band to get your music into a Tarantino movie (and you also made the song Dear Mr Tarantino). Are you still aiming for this?

Stephanie: Yes we still do. He’ll make just one more movie, so there’s a lot of pressure on the matter right now (laughs).

Alex: Probably the scene in Kill Bill where Uma Thurman is buried alive and breaks her coffin from the inside. The song that plays in the background, L’arena by Ennio Morricone was our intro on our last tour.

Your songs have been featured on TV shows such as Shameless and The Magicians. Did that bring any special recognition/publicity that gave some extra push to your career?

Stephanie: Yes, definitely! The United States are our #2 market in terms of streams and sales even though we’ve never played there. It’s really nice to see our music spread all over the world that way.

What are your favorite male/female duos?

Your second album Welcome To Kookoo Island has just come out. Tell us about the inspiration, the songwriting and the recording process!

Alex: We wrote the album during the pandemic in our secluded studio in the Fertő National Park. It felt like the whole world was going down in flames while we had an excellent time playing music and enjoying the good side of life.

Stephanie: We felt like we’re on ‘Kookoo Island’, the island for crazy people.

Alex: But sometimes it felt like everyone around us was crazy, and we were the only ones that stayed sane.

Did you use a different approach compared to when you made your first album Anaana?

Alex: I think it was a natural development from the last record. Some things changed, some things stayed the same.

Stephanie: It feels like if we tried to make a bossa nova album it would still be 100% Cari Cari (laughs) and that gives us peace of mind.

What kind of place is Kookoo Island?

Stephanie: It’s whatever you need it to be. Everybody should have their personal Kookoo Island.

You come from Burgenland. Have you ever visited Hungary and have you ever played a gig here?

Yes, sure! My great-grandmother is from Fertőrákos and I learned Hungarian in primary school for a few years. Burgenland was part of Hungary way longer than it is part of Austria, so the culture, food, traditions are very much linked to Hungary. We’re in Sopron a lot, we played Sziget and we’ll stay in Budapest for the weekend to enjoy this incredible city.