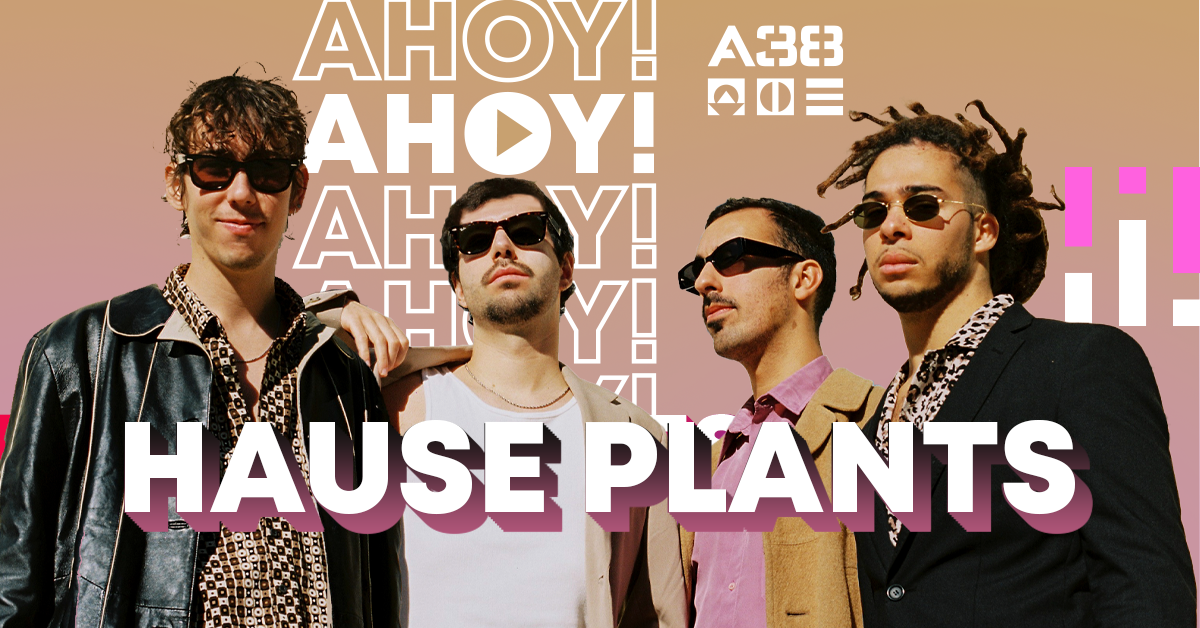 The Brooklyn based, but originally Lisbon born indie-rock band, Hause Plants’ music brings us the real light-hearted feeling of teenage years. Among other things, we asked them about the formation of the band, about moving to the US and their plans for the future.

Tell us a little about the formation of the band. How did you find each other? How did the band come together?

The band started with me (Guilherme, the guitar player and lead singer) writing songs in my room. I was encouraged by artists such as Clairo, Fazerdaze, Beach Fossils to do music all by myself in my room, with minimal equipment to focus on the songs themselves and embrace a DIY ethos. After I released Hause Plants’ first single, City Vocabulary, I got some invitations to play live and I had to find a band. This was when Dani, Janny and Simon, who play guitar, drums and bass respectively, joined me on this endeavour. They were great friends of mine at the time and I always knew that if I was going to play live, it would have to be with them.

Everyone in the band is from Lisbon. How did you end up in Brooklyn?

Moving to New York City was something I had always wanted. I grew up listening to The Strokes, LCD Soundsystem, Yeah Yeah Yeahs, and watching shows like How I Met Your Mother and a lot of Woody Allen movies. At some point in 2020, I found out that Dani wanted the same and we decided to go together. From there, we were one night out with the rest of the boys away from deciding that we would all go to play live as much as possible and spread the word out about Hause Plants.

Where did the band name, “Hause Plants” comes from?

This is actually funny and I may not have the answer you were looking for ahah. I was having troubles finding a name for the band, and at some point my friends Brooke who lives in Madrid was listening to the song Houseplants from Squid and she was the one who came up with the idea for Hause Plants. We just changed the O to the A so it was easier to find on Google ahah.

Practically you were living in two different continents, and were surrounded by different cultures. How does this affect the life of the band? Does it influence your music or your attitude towards music?

It definitely had an influence on our music! We learned a lot by living together for so long and also by being surrounded by so many great bands in Brooklyn! We went to a lot of shows, met so many new people and it definitely inspire us to be better at everything we do as a band.

What do you think are the pros and cons of being an upcoming band in the USA? Is it easier for you to expand worldwide because of your European roots?

I think you can move anywhere or not move at all to be able to invest in your band. It’s totally up to you and not up to the place you are living. For us, New York made sense because we wanted to be there even if we didn’t have a band. The US is obviously a country full of opportunities and we really felt that, but it’s also a country full of adversities. It can be really hard to be a musician in NYC. Luckily, we met amazing people that helped us navigate the city and taught us everything we need to know, and we couldn’t have asked for better!

What inspired your first EP called Sleeping With Weird People, which you released last year?

We wanted to do music with guitars that people could dance to! That was the goal and I think that’s what we’ll keep chasing on our next release, which will come out this year!!

How are your songs created? Who writes the lyrics, who comes up with the themes and ideas?

I used to do everything myself, but for this last EP, Sleeping With Weird People, I showed all the songs to the guys when I was finishing them, so they could help with the overall structure and arrangements. It obviously made the songs a thousand times better!

What is the best story in the band’s life so far?

Having the opportunity to tour Europe and play A38! 🙂

For the success of a band, it is essential that the band members are also friends. How is it with you? Do you spend time together outside of band duties? Are you best friends?

At some point last year, we were all having dinner at McDonalds on our way back to Lisbon after the show, and we did the math. Turns out, we spent more time together in 2022 than with our girlfriends or family. I believe that says it all!

What are your plans for the future?